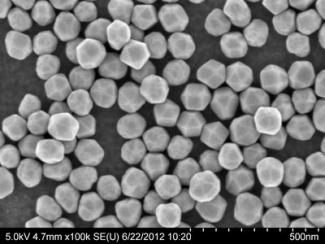 Temperature is a central concept in thermodynamics and one the most important parameters for describing phenomena in macro-, micro- and even in nanometer scale. Obtaining temperature at the nanoscale has become a widespread area, since its a crucial parameter for several emergent applications, such as intracellular temperature fluctuations and microfluidics. Light based thermometers are non-invasive methods to determine temperature and are based on a change of one spectroscopic feature with the thermal energy variation, like the position of a peak, the intensity of one or more transitions or even the variation of the excited state lifetime of a certain emission. LiYF4 has been described as a highly efficient host for upconversion emission, especially compared with other fluoride or oxide hosts, exhibiting a strong emission in the visible region when excited in the near infrared providing the adequate doping ions. Here, we describe luminescent based thermometry of LiYF4 nanoparticles on two different media; oleic acid capped were used as a primary thermometer in cyclohexane whereas cysteine modified nanocrystals were used in an aqueous dispersion, both of them using the upconversion intensity ratio of the 2H11/2  4I15/2 and 4S3/2  4I15/2 emissions of Er3+ ions using 980 nm excitation.